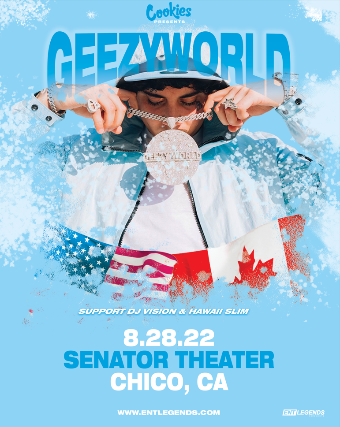 Alejandro Coranza, known professionally as OHGEESY, has rapidly become a name to watch out for on the rap scene. The Los Angeles, California native began rapping when he was 18, and founded the group Shoreline Mafia in 2016 with several other rappers. The group quickly found success with their early releases and controversial music videos, and were signed to Atlantic Records in 2018. In 2020, the group announced that they would be splitting up in order to pursue solo careers.

OHGEESY has proven himself a force to be reckoned with both in the studio and out on the road. His OTX Tour with Shoreline Mafia in 2019 was completely sold out, and he has collaborated with the likes of contemporary hip hop greats such as Tyga, Future, Kodak Black, YG, and Lil Yachty. Shoreline Mafia’s debut album Mafia Bidness was released in 2020 and peaked at #27 on the Billboard 200 Chart.

The OHGEESY brand extends to much more than just music: in 2017 he started his own line of OTXBOYZ branded merchandise, which can be found on his official merchandise website, GEEZY WORLD. The line offers selections for men, women, and toddlers, and includes standard clothing options as well as items such as exclusive skateboard decks, rolling trays, fake eyelashes, face masks, and posters.

After the split between Shoreline Mafia, OHGEESY began working on his next solo release, Geezy World Vol. 1, which can be expected mid-2021. In the meantime, he has already released a new solo single, “Bandemic (E.D.D.)”