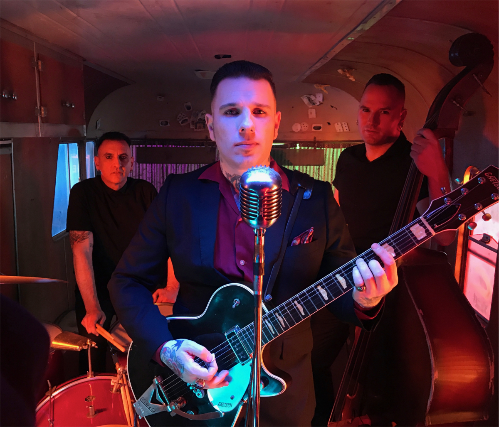 Due out Sept. 13, 2019, ‘Retrofuture’ is the bands’ sixth full-length (their second on Luna-tone / Rise Records) – it arrives a full two decades after their first album.

Produced by Ted Hutt (The Gaslight Anthem, Old Crow Medicine Show, Lucero), the LP’s concept is elaborated on by frontman Nick 13: “Retrofuturism is generally a visual aesthetic, but it got me thinking, it’s the perfect description for our sound! The gear and instruments are mostly 1950s and 60s, but while the tones may be classic, we’ve always tried to push into uncharted territory musically with each release. So the idea behind this record was to create our version of what someone might imagine future rock ’n’ roll sounding like, but from the perspective of the mid-20th century.”

Brimming with vintage fuzz, tape echo and reverb, the album’s thirteen tracks weave stylistically through vintage punk, garage and rock ’n’ roll, while still maintaining a curious modernity as influences from Latin music to surf shoot through like satellites in the night sky. Present as always are the band’s signature melodicism and 13’s ethereal vocals.

The band will embark on the “Retrofuture Tour” in September, with dates through the end of 2019 taking them across the United States, Canada, Europe, UK and Mexico. Fellow Angelenos, SadGirl will support in the States, with Finnish post-punks, Grave Pleasures supporting in Europe and the UK.

‘Retrofuture’ follows last summer’s ‘Dark Paradise’ EP, the title track being the trio’s take on the Lana Del Rey song. The EP drew on mid-century surf and exotica music, while the visuals reflected a love of Tiki subculture. The single received airplay on KROQ in Los Angeles and various specialty radio stations around the country. The release was supported solely by two sold out shows at The Theatre at Ace Hotel in Los Angeles, as the rest of the year was reserved for writing what would become the new LP.

Tiger Army started in 1996 in Berkeley, California – playing their first show at seminal DIY venue 924 Gilman. A trio with electric guitar, stand-up bass and drums led by singer, guitarist and songwriter Nick 13, the band’s sound is a unique blend of punk and mid-century rock 'n' roll, with an emphasis on songwriting and melody. The band has called Los Angeles home for the majority of its existence, since 2000. Their live sets have to be experienced, taking the audience on a journey from high-impact stompers to atmospheric ballads, drawing as much at times on Monument-era Roy Orbison as The Ramones.